Cynicism masquerades as wisdom, but it is the farthest thing from it. Because cynics don’t learn anything. Because cynicism is a self-imposed blindness, a rejection of the world because we are afraid it will hurt us or disappoint us. ~  Stephen Colbert, Talk Show Host & Comedian 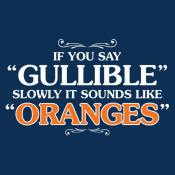 Cynics are angry, unpleasant, sad people who love to mock everyone and everything. Anyone can be cynical. It’s easy. All you have to do is believe the worst about people and situations. Then when someone or something disappoints you, you can be smug and snarky and say, “I knew it.”

Gullible people are happy; their smile is uplifting. They make us laugh. It takes a much greater faith to be gullible. I know that from personal experience.

I was 30 when my now late husband convinced me that rabbits lay eggs. The conversation went something like this.

HIM, looking at the five empty Easter baskets I’d retrieved from the attic: “It’s gonna take a lot of rabbits to lay a lot eggs to fill those baskets.”

ME, chuckling: “I think you mean chickens.”

HIM, crossing his arms and leaning against the counter: “That’s what everyone thinks.”

ME, rolling my eyes: “Because it’s true. There’s no such thing as rabbit eggs. Rabbits have bunnies.”

HIM, looking incredulous: “Why would an Easter Bunny bring chicken eggs? Rabbit eggs are rare because of that protected bird. You know, the one the Fish and Wildlife Service is always fussing about becoming extinct?”

ME, reaching into a memory bank: “Which one? The piping plover?”

HIM, holding his hands out about twelve inches apart: “Nah, it’s that huge bird with the long, pointy, curved beak. It only comes around after the snakes go into hibernation.”

ME, still trying to come up with the name of the bird: “Snakes hibernate?”

HIM, nodding his head: “You were never a 4H girl, were you? The bird shows up in late winter-early spring to scout rabbit rookeries. It pokes a hole in the rabbit eggshell and sucks out the insides.”

ME, thinking about starting a foundation: “Why doesn’t the Fish and Wildlife Service protect the rabbits, too? We should do something.”

HIM, rubbing the scruff on his chin: “We might could switch to chicken eggs this year.”

I admit gullible people are often wrong in what they believe and repeat. But I’d still rather be lied to and laughed at than chance mistrusting an honest person. It helps me enjoy the journey to reality rather than be miserable the whole way to it.

Besides, who would you rather spend the day with? The woman on the left below or the man on the right? I thought so. One has the gift of gullibility. The other clearly does not. Can’t you imagine telling this woman just about anything? She would smile even as he harrumphed. 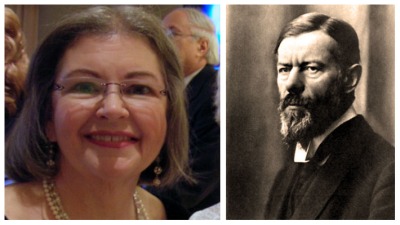 LEFT: My friend, Debra, with her ever-present, unsuspecting smile. RIGHT: A cranky cynic I’m glad I do not know.

The inclination to believe in the fantastic may strike some as a failure in logic, or gullibility, but it’s really a gift. A world that might have Bigfoot and the Loch Ness Monster is clearly superior to one that definitely does not. 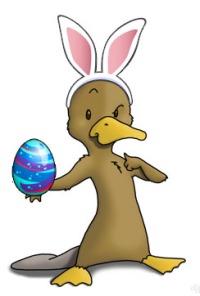 Right. How about a cynical Easter platypus? Sure.

ME, being interrupted by my husband while writing this: “What did you say, honey?”

HIM, repeating his comment: “Did you know that the duck-billed platypus lays eggs?”

ME, slumping in my chair: “You don’t really expect me to fall for that, do you?”

HIM, shrugging off a smile: “How ’bout tomorrow I take you to the farm to see that dog of yours?”

ME, bright-eyed and bushy-tailed: “You mean it?”

I am sending you out like sheep among wolves. Therefore be as shrewd as snakes and as innocent as doves. ~ Matthew 10:16 (NIV)

5 thoughts on “Orange Is the New Gullible”