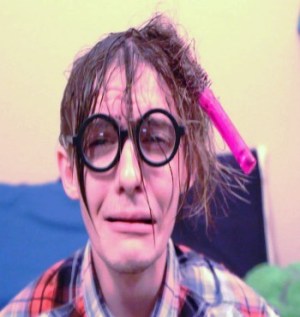 Words not often used to describe me: Graceful and genius. Am I okay with it? I have to be. I’ve proved it o’er and o’er.

Years ago, while getting ready for a lunch date with some friends, I decided my style could use a boost. I planted myself in front of the bathroom mirror with my new electric styling brush, then grabbed a clump of hair.

At first, while trying to manipulate the brush, I blamed my awkwardness on being left-handed. But after I rolled my hair in the wrong direction, I realized my reflection was the problem—it was not cooperating with my brain.

In an effort to correct my error, I tried to unroll the brush. That was my second mistake. Or was it my third? In either case, now it was rolled so tight it was burning my scalp.  [Ah, some of you have done this, haven’t you?] After a Mississippi minute (on a mid-August day), I was smart enough to unplug it.

The styling tool of the century was stuck in my hair. Stuck good. I tried to untangle it for an hour—okay, maybe it just seemed like an hour—until the strength in my arms gave up.

Stalling for time I didn’t have, I stared at myself, pondering whether the curling brush was actually hanging on the left side of my head or the right. Did it really matter? Denial had set in.

I reached for the scissors and cut.

My friends never said a word–even when I used one hand to eat and the other to hold my comb-over in place.

PS: Stayed tuned. I’ll tell you how I unintentionally pierced the inside of my ear with a paper clip.

“Friends, this world is not your home, so don’t make yourselves cozy in it. Don’t indulge your ego at the expense of your soul. Live an exemplary life among the natives so that your actions will refute their prejudices. Then they’ll be won over to God’s side and be there to join in the celebration when he arrives.” ~ 1 Peter 2:11-12 (MSG)