It’s near impossible for a writer to go out in public without imagining characters for their next novels.

Once, while waiting at a bank’s drive-up window, I wondered about my teller’s hair–which was really a bad wig. Why would she pick a style from the ’60s? Was she threatened by the aging process? Or had she spurned the whims of fashion?

The drawer slid open with my receipt. I reached over my half-opened, stuck-off-its track window to retrieve it. My arm wasn’t long enough. While I tried not to stare at the woman, character names for her ran through my head: Paula? Nancy? Frances?

I soon realized I’d have to open my door and half-step out to get my hand inside the drawer. I had one foot in and one foot out. Unfortunately the car was in drive, and the foot that was in was not on the brake.

I grabbed the receipt and hopped alongside my rolling car to the end of building. It came to a stop after it withdrew the bank’s downspout.

All because of that woman’s hair.

Recently, I was developing a female character. It was important for this character to be recognized by her perfume, which meant researching fragrances. I tested a multitude of brands in department stores. All I came away with was a bunch of stinky samples and a whopping headache.

None of them were right for my character. I needed to simplify my method. I would sniff it out in a more natural habitat.

It worked. I was standing at the deli counter in Hannaford when I smelled the perfect scent: Clementine and cactus flower, bergamot, Hawaiian tuberose, spring honeysuckle, frangipani, musk, exotic woods, and nectarine. [Research, people research!]

I looked around and tried to figure out which woman owned it. The one in the Nike jogging suit? The lady with the kerchief and polyester pants? The one in the beige top and funky straw hat who looked a lot like Minnie Driver? 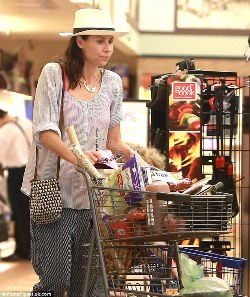 I wove my cart in and around them, sniffing as subtly as I could, pretending to check out cheese. I quickly eliminated the kerchiefed woman, who smelled more like salami than the salami she was buying. I tucked her away for another day.

I tailed the other two women until I reached a fork between two aisles. It called for a quick decision. I chose the Minnie lookalike. I tried to get as near to her as I could without drawing attention to myself. I dropped a few items in my cart to throw her off. Each time I got close, I sniffed, surer than ever I was on the right scent.

Even when she skipped aisles and pushed her cart faster, I kept up. I had to have the name of that perfume!

At one point, she gave me a weird look. I wasn’t sure if I’d blown my cover or if she’d looked in my cart. I’d been in the store for forty-five minutes and all I had to show for it was a jar of Gerber strained peas, a box of matches, and a toilet plunger.

Before she called security, I gave up the hunt. I retraced my steps and found the makings for dinner. Rather despondent, I checked out.  All my research had been for nought.

Pushing my cart through the lot, I couldn’t believe my good fortune. Loading groceries into the car parked right next to mine was my perfumed lady!

I sprinted toward her, then slowed to a stroll, blocking her only way of escape. I said, “Excuse me, you may have noticed me in the grocery store?”

“Ye-es.” She quickened her pace and scanned the area.

Before I could finish my explanation, she gave up the name of her perfume and took off faster than I could say Tommy Bahama.

Nice woman. Haven’t seen her since.

Because of Christ, we give off a sweet scent rising to God, which is recognized by those on the way of salvation—an aroma redolent with life. ~ 2 Corinthians 2:15 (MSG)

9 thoughts on “Why I Stalked a Shopper in Hannaford”