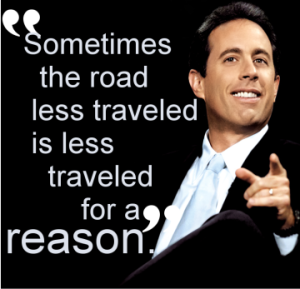 You know that famous “road less traveled” that M. Scott Peck wrote about? There’s a reason it’s less traveled. People like me can’t find it.

Kind friends refer to me as “directionally challenged.” Others call me names school children are forbidden to use. I’m more of an in-the-moment type of person rather than an observer-of-signs. Being in the moment is tough enough without  navigating simultaneously.

Maps, shmaps. My internal compass has convinced my brain that these statements make perfect sense: 1) NORTH is always the direction I’m facing; 2) SOUTH is always behind me; 3) EAST is to my right; and 4) WEST, to my left. Hey, it works a quarter of the time, so I can’t complain.

Of course, it doesn’t help that I second guess my every turn. You know what they say about second guesses. They’re wrong. By the time I’m lost, it’s too late to determine if my first guess would have been right. Even now, after nine years of living in a small town in southern New Hampshire, every intersection brings a surprise. “Huh. So this is where this road comes out?”

I had my first big, lost adventure as a high school senior. I took a trip from Cape Cod to Providence, RI to visit my boyfriend with his young cousin. I assured her parents we’d be back before dark. As promised, with plenty of time, we got on the road. Which road was the question.

Searching for signs to the highway led me to dead ends and questionable neighborhoods. Each time I stopped for directions, I only remembered the last instruction the gas station attendant had given me me—which is never a good place to start. My young passenger became anxious. As darkness fell, her anxiety turned to fear. So did mine.

Being the older, more responsible one, it fell to me to reassure her. At the next turn, I sang out, “We’re fine! Yup. This looks familiar.” When the street lights grew further apart, I slowed to a crawl and clicked on my brights.

Good thing. We were in a beach parking lot about twenty feet from the ocean. In New Bedford. 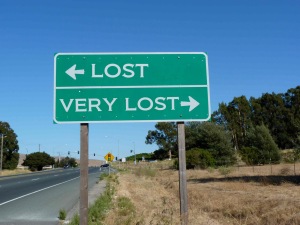 Many years later, after I was widowed, I realized I had nothing to hold me back from traveling. When I noticed a “Lease Me” sign on a large, van-sized camper, I thought about driving across country. My excitement mounted. My mind raced. My bravado grew. Now all I had to do was run the idea past my friend, Kellie, who had taken on the role of my mentor (a nice word for watchdog. Every widow needs one. Trust me.)

While driving her home one afternoon, I broached the subject positively and coveted her blessing. She pondered the matter for about as long as it took me to miss her exit and circle the rotary three times. I can still see her folded arms and smug stare.

I know I’m not alone in this condition. Once, my friend, Brenda, and I decided to attend a women’s conference in Sturbridge, MA, about two hours away from our home on Cape Cod. We thought if we drove together, one of us could act as the navigator. We soon learned “acting” as a navigator didn’t necessarily equate to being one.

After we backtracked a few exits out of Connecticut, we arrived in Sturbridge and found the sprawling hotel. For three days we trekked up and down endless hallways, the conference rooms eluding us. I was relieved when we reached our destination almost on time for one of the events. Not wanting to disturb the speaker, I opened the door quietly, stepped in, then stopped short. Brenda, hot on my heels, rear-ended me, thrusting us unceremoniously into the small room.

We might have been publically humiliated—if it hadn’t been the janitor’s closet.

ME, with a pure motive and generous heart: “Want me to spell you for a while?”
HIM, glancing at me with raised eyebrows: “With your sense of direction?”
ME, gesturing with my hand toward the open road: “We’re on the highway! How lost could I get?”
HIM, narrowing his eyes: “What about your other issue?”
ME, my forehead furrowed: “What other issue?”
HIM, treading carefully: “Uh, haven’t you fallen asleep behind the wheel before?”
ME, pointing to the edge of the road, “Yeah, but that’s what rumble strips are for!”

Uh? Oh. I thought this was an artist’s depiction of a road to Heaven. My husband just told me it’s a picture of the Gateway Arch in St. Louis. I can even get lost in Google.

While on Earth, I’ll have to deal with roundabouts, stop signs, deadends, and plenty of wrong turns. Thankfully, to get to Heaven, all I have to do is hang onto Jesus. He’ll take me the rest of the way.

Amazing grace! How sweet the sound
That saved a wretch like me.
I once was lost, but now am found,
Was blind but now I see. ~ Hymn by John Newton (1779)

9 thoughts on “There’s a Reason the Road is Less Traveled. People Like Me Can’t Find It.”