For in the same way you judge others, you will be judged, and with the measure you use, it will be measured to you. ~ Matthew 7:2 (NIV)

As an author, here’s how I imagine things versus how they really are. Sort of.

A middle-aged widow attended Small Church in Small Town. Though she loved the church, it didn’t have a promising selection of eligible men. None, to be exact. When she heard about an active Singles Group in Big Church in Bigger Town about an hour’s drive from home, she signed up for their Potluck Social two weeks away.

As excited as she was, she had a few concerns:  How much weight could she lose in two weeks? Could her hairdresser do her roots the day before? What would she wear if she lost weight? And what would she wear if she didn’t? Most of her friends were married–could she walk in alone? If she invited a single friend, would it increase the odds against her? More importantly, what could she make that would make a man’s mouth water? 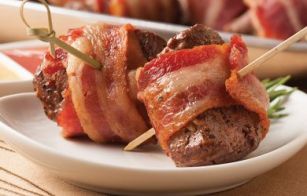 Thankfully, the widow’s hairdresser was able to fit her in the day before and even added red highlights. Then, with one quick stop, she found all the ingredients on sale to make double bacon-wrapped tenderloin tips and molten chocolate lava cakes. She grabbed a family-size bag of barbeque chips just in case.

The morning of the event she stepped on her scale. She was ten pounds lighter! Off to a great start, she happily chose a dress she hadn’t been able to fit in since she bought it. Once she’d prepared her delectable contributions to the potluck meal, she packed them in the  thermal containers and was off!

There was very little traffic, so she found Big Church without a hitch. She had arrived early enough to appear polite, yet not desperate. Greeted warmly by a gray-haired woman a few years older and a few pounds heaver, the widow set her creations on the buffet table between an egg salad sandwich platter and a bowl of pickled beets. 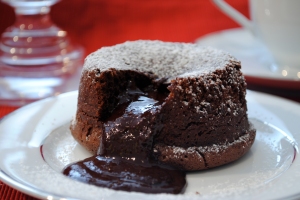 The aroma of her double bacon-wrapped tenderloin tips caused a mad dash of single, well-dressed, good-looking, middle-aged men to rush in through multiple doors. All were suitably employed and loved to cook, do housework, and redecorate rooms.

The biggest problem the widow encountered that day was which single man to keep.

Her hairdresser wasn’t able to fit her in, so she colored her own roots and added red highlights. She mustn’t have waited long enough for the root color to set because the highlights turned her gray roots hot pink.

She scrambled around multiple food stores, confused about what to make for the Potluck Social. Not much of a cook and on a limited budget, she ended up buying an accidently-thawed Mrs. Smith’s pumpkin pie and a crushed box of Choco Mallows from the seconds bin. She grabbed a bag of chips, but ate them on the way home.

The morning of the Potluck Social she weighed herself (before dressing, after peeing). Stress-eating over this whole affair had resulted in a gain of eight-plus pounds. Off to a crummy start, she had to wear that navy, flowered dress she’d vowed never to be seen in again.

She baked the thawed pie according to the directions on the box. The crust burned so she removed it and cut the rest of the pie into weird geometrical shapes, some of which  rocked. She unwrapped the Choco Mallows to make them look more homemade, then put them and the pie bites in disposable plastic containers. And she was off!

She got lost trying to find Big Church in Bigger Town. An hour late, she was greeted by a blonde, twenty years younger and twenty pounds lighter, who said, “Where did you come from?” When the widow told her Small Church in Small Town, the younger woman said, “Then why don’t you start your own singles group there?”

With no real answer, the widow found the buffet table where she placed her squished 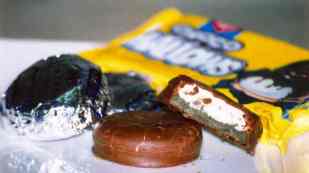 pumpkin shapes and melted Mallows near an empty platter that still had the aroma of bacon and beef. She weaved through the full room of singles carrying a paper plate filled with a beet-juice-soaked egg salad sandwich and three cold pigs ‘n a blanket.

There were way more women than men in attendance. And from what she overheard, most of the men her age were talking about their mothers–whom, it seemed, they still lived with.

She found a seat in an outside circle of chairs. Inside the circle, smaller circles of people stood and chatted amiably with their backs to her and their backsides inches from her plate.

No one, other than the blonde, spoke to her the long, painful hour she was there. It was as if a secret alarm had sounded: WARNING! WARNING! NEW WIDOW ON THE PROWL! (Not nice,  even if it was true.)

The biggest problem the widow encountered that day was how to find the exit out of  Big Church so she could get back to Small Town fast.

For now we see through a glass, darkly; but then face to face: now I know in part; but then shall I know even as also I am known. ~ 1 Corinthians 13:12 (KJV)

Rescue the perishing; don’t hesitate to step in and help. If you say, “Hey, that’s none of my business,” will that get you off the hook? Someone is watching you closely, you know— Someone not impressed with weak excuses.  ~ Proverbs 24:11-12 (MSG)

It is absolutely clear that God has called you to a free life. Just make sure that you don’t use this freedom as an excuse to do whatever you want to do and destroy your freedom. Rather, use your freedom to serve one another in love; that’s how freedom grows. For everything we know about God’s Word is summed up in a single sentence: Love others as you love yourself. That’s an act of true freedom. If you bite and ravage each other, watch out—in no time at all you will be annihilating each other, and where will your precious freedom be then?  ~  Galatians 5:13-15 (MSG)